and here are some blurry pics from a pub! 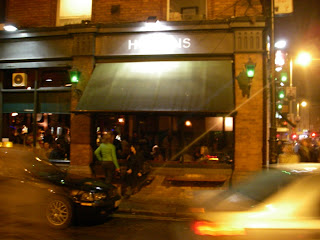 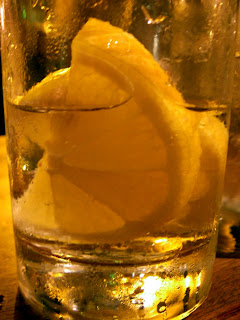 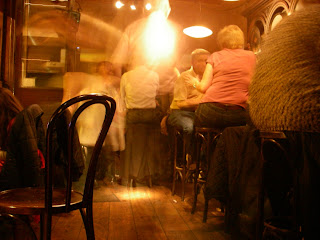 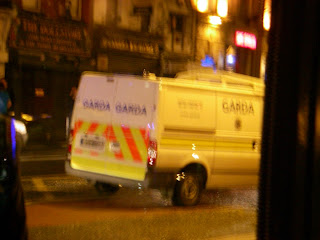 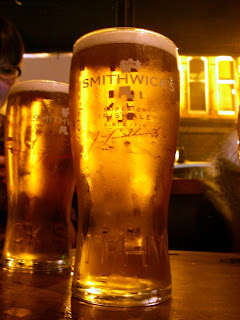 This is Hogan's pub on George's Street, just a couple blocks south of Dame Street in Dublin.  We met an Irish friend who was recently transferred to the Netherlands for his job.  We started with gin & tonics and traded funny stories about travelling.  I told my story about driving through San Francisco at midnight one evening and not realising it was Halloween.  Imagine my surprise to see a life-size bottle of Jack Daniels running up Van Ness Avenue chasing a life-size Snoopy and an Alcatraz inmate.  Then imagine my surprise to see a group of 6 guys dressed as women... and realising they weren't in costume.  Good times.

Our friend visiting from the Nethrelands told us the Dutch have a few social idiosyncracies that we just don't parse in the Anglo-Celtic countries.  For example, he made the mistake of asking a coworker, "How are you?" one morning and she replied, "My pee pee is sore.  I have a prolapsed bladder!"  Ummmm.... oh kaaaay...  Apparently when you ask, "How are you?" in the Netherlands it means, "Tell me about your health, the state of your bank account, your spouse's sinus infection and all your children's school projects."

Apparently the Dutch get a little pissed off when they ask, "How are you?" and our friend replies with a simple, "hum... not bad," which is a normal response in Ireland.  They think he is being rude and demand to know, "What is this 'not bad'?  What does this mean?"

Also, he mentioned a little awkwardness at the pub because--in Irish tradition--it is considered polite to buy a round of drinks for the folks at your table.  In the Netherlands, buying a drink for someone means you are hitting on them and hope to be doing naughty things with them on the couch later.  And in case you're wondering, yes there was a rather awkward moment after he bought a round of drinks for his coworkers in Maastricht.  One of them was interested.

Anyway, while we were having a nice time talking, there was a little drama outside involving flashing blue lights and emergency vehicles.  We looked over just in time to see a rough-neck teenager being wrestled into the back of a Paddy Wagon.  Yes, they also call them Paddy Wagons in Ireland.  (grin)

After that, we were pleasantly greeted by a representative from Smithwick's who gave us a free pint of Smithwick's Pale Ale.  First of all, thank you Smithwick's Guy!  (Matthiew) and secondly, YUM!  That was good.  They use Amarillo hops which adds both aroma and a spicy citrus character.  It was flavourful and fresh without being bitter in any way.  Matthiew told us that it was made in Killkenny, too.  Way to go Ireland!
Posted by Hitchhiker42 at 10:35