On May 31, Ireland has asked people to go to the polls.  There will be only one measure on the ballot.  The government is calling it the Treaty on Stability, Cooperation and Governance in the Economic and Monetary Union (“The Stability Treaty”).  The political parties against the treaty are calling it The Austerity Treaty.  Irish citizens will vote on whether or not they want their government to sign the treaty.

From what I understand, the measure is a response to the current recession.  It is an agreement for all countries in the Eurozone to maintain a balanced budget, and that the amount borrowed does not exceed a certain percentage of GNP.  The official wording is something along the lines of, "Budgetary discipline requires an annual government deficit of no more than 3% of GDP, together with a debt-to-GDP ratio of 60%."

Over the next three days I would like to comment on this issue, as it seems to be a big political deal for Ireland.  There are political campaign signs up all around Dublin.  The 'yes' campaign seems pretty tame.  Their signs just say 'vote yes'.  The 'no' campaign has some pretty creative signs.  Here are three of their most inventive and/or outrageous: 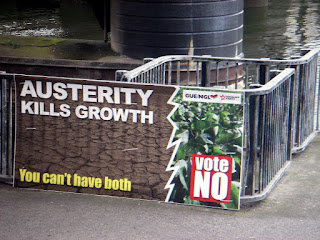 That's very clever.  Yes, I agree that you can't have both Austerity and Growth.  I seem to remember Albert Einstein said something along the lines of "You cannot simultaneously prevent and prepare for war" too.  I also hear it is impossible to whistle while you are laughing.  Oh, and you can't lick your own elbow. 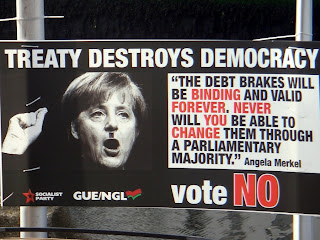 This poster plays on the fear that Germany will take over Europe. Because Angela Merkel was a key author of the treaty, people believe the treaty seeks to make every government run as the German model does.  Someone has drawn a little Hitler moustache on Angela, as you see here. (sigh) 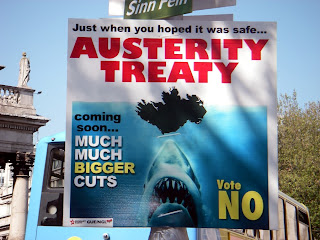 This one is just plain silly.  If you vote Yes on the treaty, Ireland will be eaten by sharks.  Maybe even sharks with lasers.  And bears with chainsaws for arms will come out of the woods.  Raaar.