I was walking in town with my awesomer half this evening.  This little black dress by Alexander McQueen caught her attention.  We stopped to admire it in the window of Brown Thomas, an upscale department store on Grafton Street. 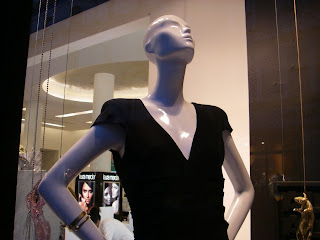 After we stood there looking at the black dress for a while, I said, "Um... isn't that a rat?"  Sure enough, the store window had a display of a dozen rats, spray painted gold and hanging by their necks.  What the...? 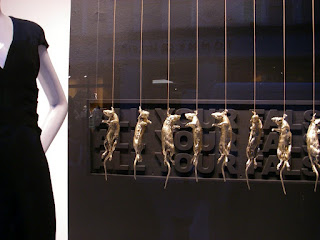 They were hanging in front of a black sign that repeated, "ALL YOUR FALSE GODS" three times.  Apparently Brown Thomas thinks they are being avant-garde by placing weird art in their street-facing windows. 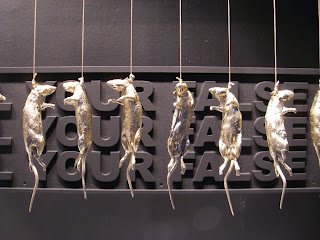 That's rather rich coming from an uber-posh commercial establishment selling Prada, Hermes, Louis-Vuitton, Mulberry, Ralph-Lauren and oh yeah, Chanel.  You know, it occurs to me this artist must have thought himself very clever to troll the store like this.  Here's some art to mock shoppers for their consumerist desires and brand worshiping behavior.  Haha they'll never notice.  Oh wait, I'll throw in a stuffed cat urinating in the corner!  That's pure brilliance. 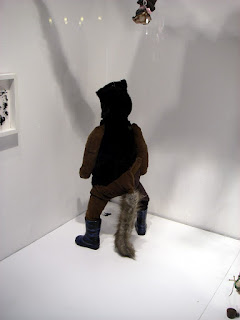 Is it me or is this artist so far up their own arse they see the light at the end of the tunnel?  We were about to leave when... DEAR LORD, WHAT'S THAT???  A patchwork cat falling from the sky!  Now I've seen everything. 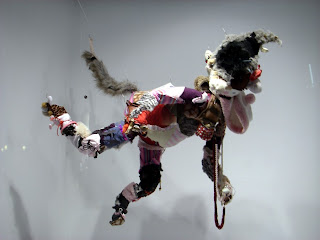 It's kind of like the Evil Monkey from Family Guy crossed with a sock puppet gone wrong.  Well, I used to think Top Shop had the worst store windows, but now I've decided that Brown Thomas gets the Merde du Taureau award.  Congratulations! 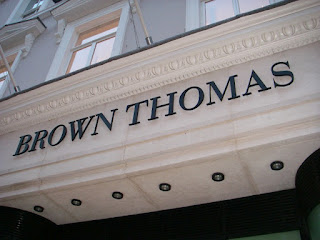