The NO camp seems a bit more vocal about the fiscal referendum.  They certainly have more signs.  They call it The Austerity Treaty.  It all started with the banks.  Oh, the banks.  The bankers have gotten away with murder.  They loaned money they didn't have, they made bad loans (a.k.a. a half-million euro house to Joe O'Blow the Tacsai Driver). The Irish government agreed to pay back the bond holders when they banks went under, and now we're up the Liffey without a paddle as far as debt and budgets go. 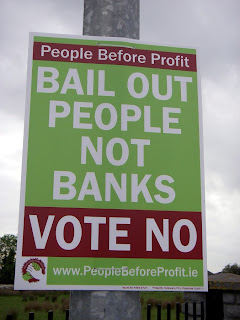 Then the government did something they have never done before; they introduced a property tax.  In Ireland, when you own your home you own your home.  Sure, they make you pay Stamp Duty (6% of the value of the house) on the sale, but that's it.  There is no annual recurring fee for property tax like we have in 'merica. 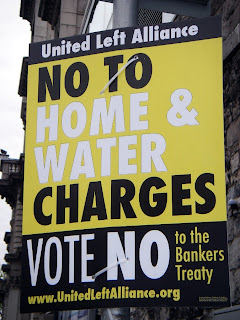 Oh yeah, and Ireland doesn't have a water tax either.  They say the rain is fond of Ireland and I believe it.  They have quite enough rain here such that the government doesn't have any reason to charge taxpayers for water... well, until now they didn't. 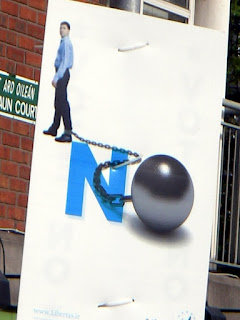 Now the government wants to saddle citizens with home-owners' taxes, water charges and a new septic tank inspection fee.  This is not going over well with Irish citizens.  Ireland has 1.5 million private households.  1 million homeowners have refused to sign up for the new household tax. 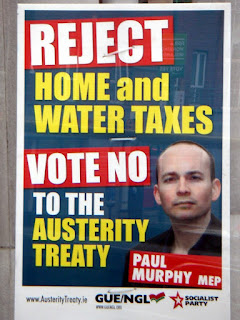 In other countries, the government is allowed to sign or refuse the "Stability Treaty" without a public vote.  However, Ireland has had a law since 1987 that such measures require a referendum. 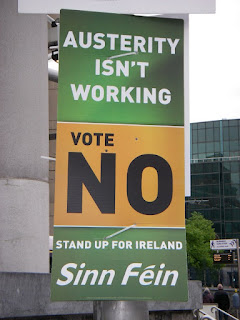 Irish Transportation Minister Leo Varadkar explained in an interview with RTÉ news that referendums are not very democratic.  He said the Irish people tend to use the opportunity to beat the government with a stick.  Varadkar expressed concern that the current referendum on budgets and government borrowing would be turned into other issues, like the household tax and water charges. 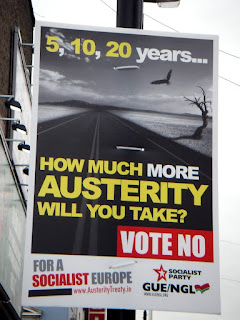 The Socialist Party, one of the biggest sign-putter-uppers in town, has done exactly that.  They are using off-the-wall and sometimes quite childish imagery to push their NO position.  (See the Jaws poster from a couple days ago.)  The NO campaign is insisting the "Austerity Treaty" will mean great cuts in jobs and social welfare. 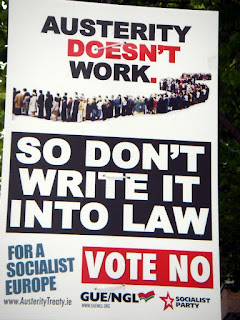 I see the referendum as more as a method for Ireland to protect the Euro currency.  They want to give investors the idea that the Eurozone is under control, instances like the crisis in Greece will not happen again, and they want to rebuild confidence in the Euro. 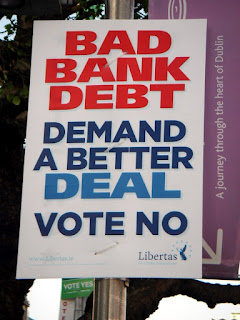 However, the Irish people really want to see the banking issue addressed.  I think they are quite put off by the government's treatment of the bank crisis and see the Stability Treaty as a hand-waving exercise.  To the populace, the government is just posturing and posing.  The government is pretending to fix "recession" issue but they're not addressing everyone's true concerns; bankers on Wall Street (and elsewhere) got away with the biggest theft in history.