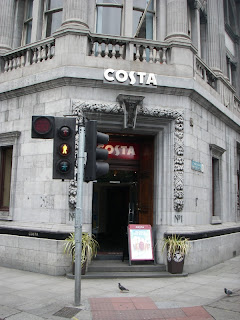 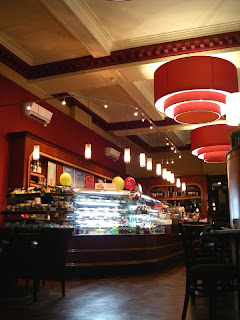 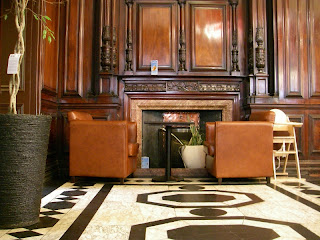 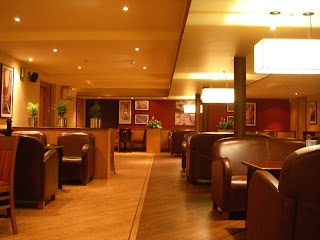 This is the coffee shop on the corner of Nassau Street and Dawson Street, over by Trinity College.  If you look at the Google maps location it shows a clothing store called Farrell & Brown used to occupy this spot.  Anyway it's another reason to like Dawson Street.  The interior of this Costa is a cut above the other locations in town as far as cool buildings go.  Plus, its big.  They have an entire room downstairs and a living room on the first floor, off the dining area.  It's like 3 coffee shops in 1.

We like going to Costa because... well I'll just say it:  I hate Starbucks.  Apparently I'm not the only one.  People hate Starbucks so much that Starbucks has started opening stealth stores without the Starbucks logo.  You read that right; Starbucks is opening shops that do not have the word "Starbucks" anywhere in sight.

Costa is a nice alternative.  They have decent caffè latte and they serve fantastic lemon poppy seed muffins.  Mmmm.  The interiors are generally comfortable and always decorated with the same stock-image artwork depicting cobblestone streets in Italy.  They're going for the authentic-Italian angle, as opposed to the Seattle full-of-themselves angle.  Generally speaking corporate coffee is corporate coffee, and comparing Starbucks to Costa is much of a muchness.  However, attitude is everything.  Costa seems to simply be about selling you a cup of coffee; they're not so much in your face like Starbucks is, pushing their retail crap on you.  With their CEO's biography, corporate-compiled Jazz CDs and branded-breath-mints stacked up on the counter, it gets to be a bit much.  Costa isn't selling that magic kool-aid.  They're just selling coffee.
Posted by Hitchhiker42 at 10:09