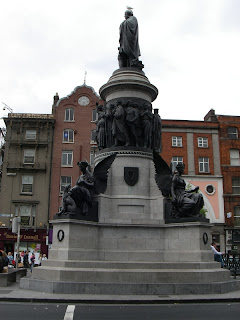 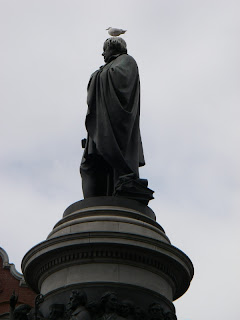 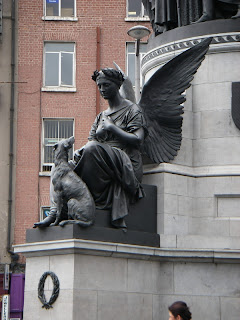 The figure of Daniel O'Connell watches over O'Connell street in the heart of Dublin.  O'Connell was a statesman in the early 19th century and fought for the rights of Catholics in British Government, (previously Parliament had been sectarian and Irish Catholics were not allowed to hold office.)  Basically, his efforts resulted in the Irish being able to represent themselves in government, where they had been excluded before.  His work also allowed British Jews the right to enter the British Parliament some time later.

This statue was installed in the early part of the 20th century after Irish independence.  The sculptor was John Henry Foley.  This is an example of public-friendly art.  Not only is it beautiful and aesthetically pleasing, the base of the statue is a series of steps which invites pedestrians to sit and contemplate O'Connell Street along with Daniel himself.  The statue is also bird-friendly, as you can see.  Luckily it rains a lot in Ireland.
Posted by Hitchhiker42 at 10:41