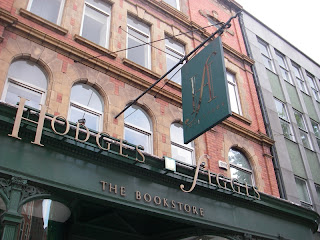 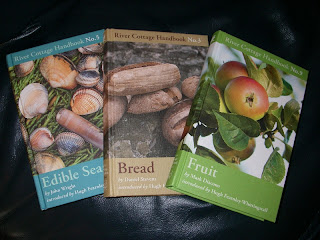 This weekend we picked up some of the River Cottage Handbooks at the Hodges-Figgis book store.  The handbooks are based on the BBC television show with Hugh Fearnley-Whittingstall.  His tv program is about getting more in touch with the food we put on our table and home-farming.  Hugh began the series by moving into a gamekeeper's cottage at an estate in Dorset and tried his hand at being a "smallholder."  I had never heard of that term before the show, basically it means trying to put food on your plate by growing it yourself--or as much of it as you can--on a small plot of land.  Hugh quickly realises it's a lot harder than it looks, and yeah, you do have to buy some stuff at the store.  You can't do everything yourself.

Anyway, the thing I got out of the show was the desire to do a bit more gardening, and looking for food in my environment.  I am so keen on getting a fishing pole now and catching some pollock (a local fish.)

My other half and I have been making bread recently, and she's getting really good at it.  I'm interested in growing fruit trees like the Orleans Reinette apple they raved about on the show.  That's a French variety that was introduced in 1776!  We plan on collecting the entire series of River Cottage Handbooks.  They are written by experts in their field, who have appeared on the River Cottage show.
Posted by Hitchhiker42 at 20:30