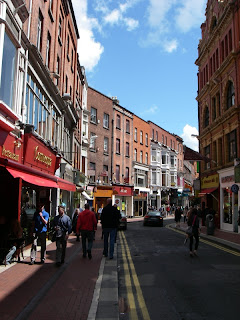 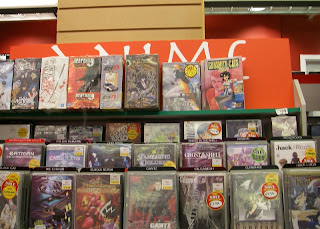 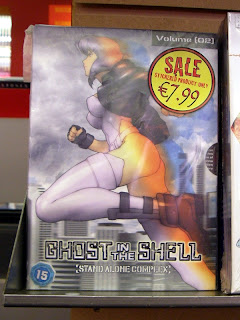 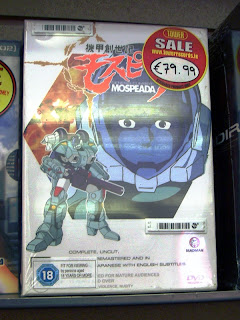 I remember the people in the Anime club in college would get really steamed up if you called it “Ann-i-may” instead of “On-i-may.” I used to say it wrong just to watch them turn red. Don't get me wrong, I'm a big fan of Japanese Anime; I just don't take it so seriously.
So, we were in Wicklow Street last weekend and my other half wanted to check out Tower Records. Hey, I'm always up for that. Upstairs we found the DVD section. She looked at foreign films and I looked at anime... which I guess are foreign films too.
Anyway, I saw two Anime DVDs that I really liked: Ghost in the Shell, and Mospeada (Robotech.)
Ghost in the Shell is a cyberpunk (think Blade Runner) series about a cop who is a replicant, (heard this story before?) Major Kusanagi works for Section 9, a counter-terrorist wing of the Japanese government. She is pretty much the bionic woman; most of her body is cybernetic and mechanized. Only her brain and spinal column are organic. The show gets into what it means to be “human” and delves into the complicated question of what is a soul, which is referred to as her “ghost.”  Meanwhile they fight cyber crime with robots and big guns.
What I want to know is, why is Major Kusanagi always running around with her pants off? Look at the DVD cover. She's a cyborg for feck's sake. She doesn't even have lady bits or the ability to reproduce, yet the producers play up this whole sexy-anime-chick angle; they give her Nancy Sinatra boots and an armored bikini top. Oh well, she is kinda hot.
The next DVD is Mospeada. That stands for Mobile Operation Soldier... er, something something Armor. Basically it's a motorcycle robot. That you wear. And it flies.
Ok, I'm not explaining this well. You've seen Iron Man, right?  Imagine Iron Man's costume, but it also turns into a motorcycle. This was part of the Robotech series that I used to watch on TV with my friends in high school. It was pretty cool. We all rushed home from school at 3:00 PM and went to a friend's house to have Cokes and cookies and watch Robotech. Robotech was an 85 episode three-part saga about alien invaders called the Invid taking over the Earth. Human beings are pushed off the planet, and the human colony on Mars launches the Earth Recapture Force to take back our planet. And yeah, it involves giant transforming robots with lasers. Not so many hot chicks in this series, but they did play up the love interests between the characters and it was kind of a soap opera. Just with robots and aliens. Come on, I was 13, it was cool! :)
Posted by Hitchhiker42 at 10:40