The wheel in the sky keeps on turning... 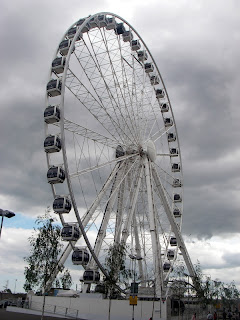 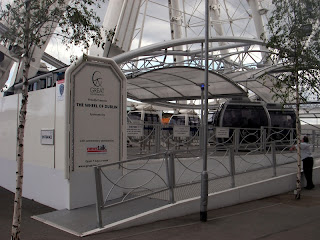 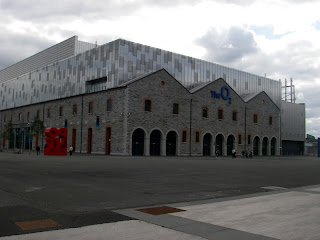 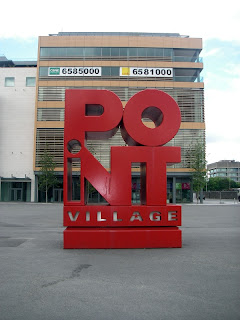 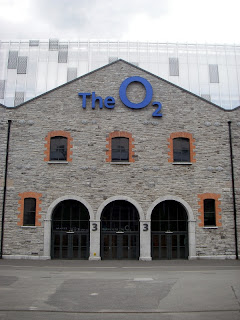 So this big wheel is on The Point next to the River Liffey in Dublin. The Wheel of Dublin was made in Holland. Isn't that weird? I think it would be really kitchy if you got in one of these ferris wheel capsules and they started playing trite rock & roll songs about wheels over the Muzak system. You know like that Journey song, the wheel in the sky keeps on turning... Other campy tunes might include “Proud Mary” by Creedence Clearwater Revival and “Spinning Wheel” by Blood, Sweat and Tears. Let's see, did I miss any? I think ELO did one called “Big Wheels” but we won't inflict that upon the tourists. You can already imagine the torture of being stuck in a little box 200 feet up and listening to someone's idea of a humorous playlist for 13 minutes. Then you would have John Fogerty's voice stuck in your head all day, mispronouncing 'toynin' and 'boynin' for hours...
Big wheel keep on turnin'
Proud Mary keep on burnin'
Rollin', rollin', rollin' on the river.
The Point is home to The O2 Theatre. What is an O2 you ask? It's a mobile phone service provider. We went to a Roger Waters concert here on my first day in Ireland. It rocked. Britney Spears and U2 have played here, not that they're any good. It is said that the venue is just big enough to fit Bono's head. Def Leppard left their rocket ship here. 50 Cent once found a 50 cent piece outside on the sidewalk. Guns N' Roses received such a cold reception here that the venue was turned into an ice rink for a week. They even say Nirvana once played here sober.
The Point is at the end of the Liffey where it opens into the chilly Irish Sea. Lucky for Axl Rose, the Garda intervened before he was tossed in. You get there by driving out towards the Docklands on North Wall Quay. It is a fair walk from the O2 theatre to the center of town, about 1.7 km. Apparently the O2 Dublin is the second busiest concert venue in the world.
Posted by Hitchhiker42 at 07:58