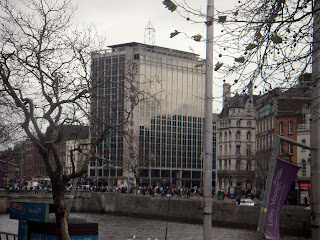 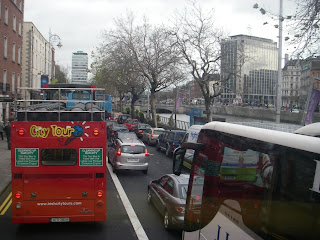 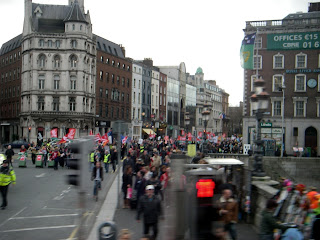 My girlfriend and I were recently talking about people who breastfeed their babies too long.  We watched a YouTube video about a woman in England who breastfeeds her daughters age 6 and 8.  You know, there comes a time when people need to be weaned off the teat.

Speaking of which, there was a Union protest in Dublin yesterday.  The Irish government is going to have to pay back their EU bailout, (and people are surprised about this?)  The government will have to cut spending to do it.  This means fewer benefits:  Allow fewer people on the dole, spend less on public health care, and reduce the number of 'public sector' jobs.  This of course, upsets the Unions, who are angry the government wants to reduce the number of street sweepers, telephone sanitisers and meter maids.  Basically, the Unions are mad they can't milk the government any more.  Wah!  Wah!  Boo hoo!

Yesterday the SIPTU (Some Ignorant People in the Teachers Union) staged a protest that blocked O'Connell street for half and hour.  My bus sat in the same place on the Quay for 1/2 an hour while idiots waved red flags over the Liffey.  And you want to know what I was doing?  I was going to work on a Saturday.  You know, the job I went to college for.

So let me get this straight... Union people are protesting the fact that the government will have to reduce the number of civil service jobs... by stopping people from getting to their legitimate jobs!  Yeah that makes sense.

Or think of it this way, Unions are protesting government's austerity measures by doing something that costs the government thousands of euro to police and clean up after.  Now Dublin has to pay 100 more Gardaí to work on a Saturday, and then run extra street-sweepers to clean up the inevitable public protest litter.  I think if the government wants to save money they should get rid of the Unions.
Posted by Hitchhiker42 at 09:16