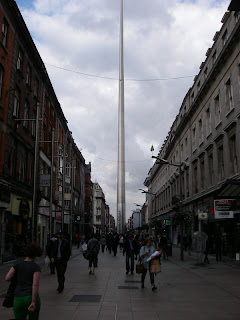 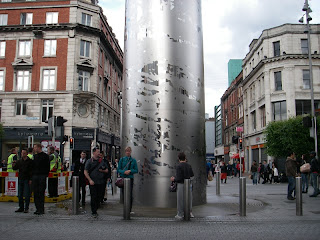 Dublin is doing its best to make sure that it will never become a Zeppelin destination city.  To that effect, they have erected this giant dirigible deterrent, called The Spire of Dublin.  Just kidding, this is apparently some form of public art that the public is still scratching their heads over.  I'm not sure the public likes it, because it has a rude nickname, which I will mention at the bottom of this post in a comment.

Construction of the 121 meter tall sculpture began in December 2002 and finished just over a month later in January 2003.  The base is 3 meters wide and the tip is 15 cm wide.  It contains a Tuned Mass Damper, which is a stabilising component to reduce harmonic vibration.  No news yet on when they will install the 1.21 gigawatt Flux Capacitor.  The Spire cost 4 million euro to build and is full of used pinball machine parts.  (Ok I made that last part up, but it did cost €4,000,000.)
Posted by Hitchhiker42 at 09:00