I'm jolly with my new brolly 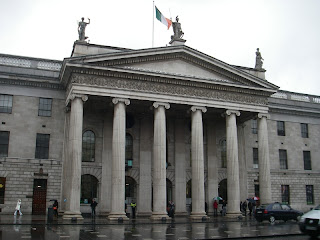 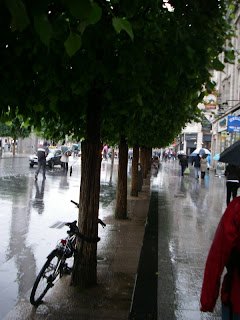 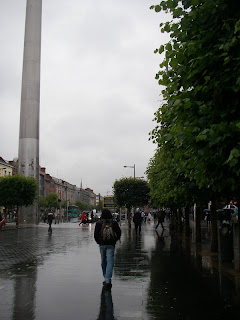 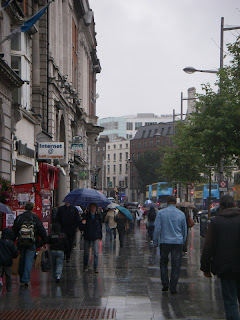 I like the rain.  This is a good thing because the rain is fond of Ireland.  This is something one must take into consideration when one moves to a new country.  It reminds me of that old joke where there is a long line of people waiting to get into Hell.  The devil comes out of the gates (you know the ones, they look just like that sculpture by Rodin) and he walks down the line.  Every so often the devil taps some pour soul on the head and his minions take that person out of line and throw them in a pile.  One curious fellow says to the guy behind him, "What's that all about?"  The other guy says, "They're from Seattle.  Too wet to burn."

Even the Irish have been complaining that this has been a terrible summer.  Well, I don't mind.  My other half and I went to Marks & Spencer, (we like to call it Marks & Sparks) and bought brand new umbrellas.  It's funny... you think, "Well this is Ireland, of course it rains a lot," but then you see so many people running around in Dublin with their coats over their heads like Cornholio from Beavis & Butthead.  It's like they were surprised by the rain or something.  That's like getting surprised by Toyotas in Japan.  I'm scratching my head wondering why everyone doesn't have an umbrella permanently attached to their wrists, like those secret agents you see in movies with a briefcase handcuffed to their hands.  When I brought up this conundrum with my other half she said, "Maybe they're just used to it."  Oh.  That makes sense.

The photos above were taken around the Post Office on O'Connell Street in Dublin.  The weird silver pole is The Spire of Dublin.  More on that later.
Posted by Hitchhiker42 at 08:42