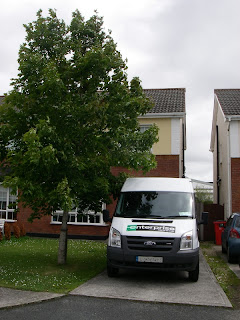 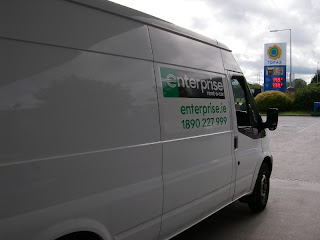 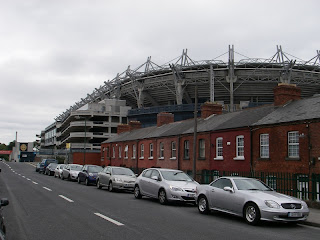 This is what we did last weekend; we rented a van and moved stuff.  I helped my other half move out of her old house.  We like Enterprise since they usually give us a good deal and they seem like they have their heads screwed on right.  So, we booked a little station wagon, (in Ireland they call them Estate Wagons) for 28 euro a day.  We took the bus into the center of town and walked through a sketchy area called Mountjoy Park, over to an enormous sports complex called Croke Park.  I guess that is where they have soccer and Irish Hurling matches.  (No, Irish hurling is not what you do after drinking too much at the pub.  haha)

So, we arrived at noon as our reservations stated, and there was no little station wagon.  The folks at Enterprise were very apologetic; the previous renter had not returned it yet.  Would we like a larger van?  Er... yeah, fine.  We walked outside.  Holy crap!  This thing was a monster truck.  Well, ok it was just a Ford Transit van but it was a really enormous Ford Transit van.  You could fit the planet Mercury in the back and still have room for a Space Shuttle or two.

This was my first experience at driving since arriving in Ireland.  Allll rightie then:

Transfer is complete on an internal power with the launch vehicle.

All engines running, LIFTOFF. We have a liftoff.

Dublin, this is Transit.  Tower cleared.

Oh, I should mention that when we got the van there was an enormous scrape on the left side.  The previous renter had grossly misjudged the size of the vehicle and whomped a telephone pole pretty good.  The agent at Enterprise told me (with a pleading look in his eyes) "Just take your turns pretty wide, alright?"
Posted by Hitchhiker42 at 10:02