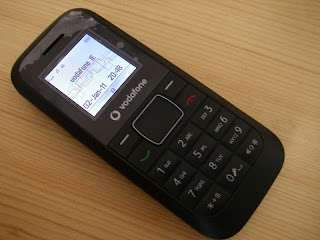 This is what you get at the Vodafone shop for 20 euro. It has a built-in FM radio. Really! There is also a little lens at the back which looks like a digital camera, but it is really a flashlight. Er... that's the Torch feature.
The phone works alright, but I sound like I'm standing in a tunnel and the default ring-tone sounds like an ice cream truck. I'm still getting used to that. Nothing in my brain is able to connect the noise to the phone. I'm sure Oliver Sacks would find this amusing: When it rings I think of vanilla. The sound my phone makes is an entirely forgettable, near-random series of electronic noises, and not really a “song” that I can distinguish. Surely this is a design flaw; there is nothing about the noise the phone makes that says, “I'm the phone, answer me.” If anything it tells my brain that I need to look for a euro and run outside.
The other thing that I find mind-boggling about this phone is that it does not automatically synchronize the date and time with the network. Every single cell phone I have owned—starting with my old Motorola Star-Tac flip phone back in 2000—has set its own clock, thank you very much. Irish mobile phones don't do that, even the expensive ones. So no, I didn't take this picture on January 2nd at 20:48. It was last Tuesday at 2 in the afternoon. My next phone is definitely going to be an iPhone with a Pink Floyd, Dark Side of the Moon cover. It will play a ring-tone like the guitar intro to “Money” and it will have a Nixie clock app, which I may have to write myself.
Posted by Hitchhiker42 at 09:53