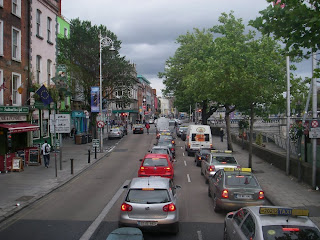 I've been going to Dublin on the bus a lot and I'm getting to know this area pretty well. Dublin seems a lot like San Francisco just with more Irish people. Oh and there is a river running through the middle. Other than that, it's pretty metropolitan without being overly huge, just like San Francisco. People have described San Francisco as being, “The smallest big city.” I am inclined to agree; San Francisco is compact yet metropolitan, with posh neighborhoods rubbing shoulders with nasty ones. Case in point: Union Square and the Tenderloin. Dublin city center is close Mount Joy Square, a rather crummy neighborhood near (one of) the prisons. Marks & Spencer, Lush and L'Occitane are close enough yet far enough from shiv city. Anyway, I suppose any big city has its dirty armpits. We won't dwell on the negative. The city center, O'Connell street, Henry Street and Jervis Street are all pretty decent. It has been fun exploring the funky shops and cobblestone streets. So far I've just been circling The Spire—a huge needle-like sculpture near the post office—but I plan on checking out the area around Trinity College and St. Stephen's Green when I have the time. Grafton Street is supposed to have some good shopping.
Posted by Hitchhiker42 at 19:10