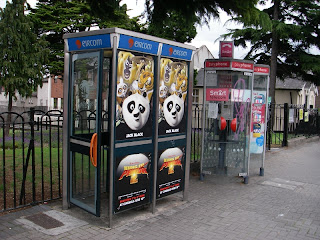 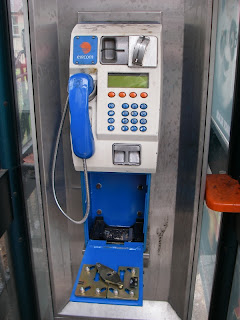 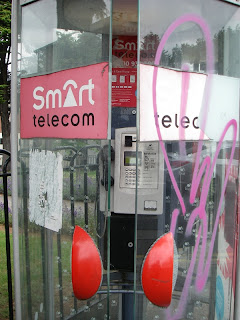 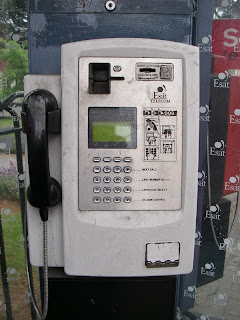 These old soldiers stand on the North Circular Road in Dublin, relics of an era when public communication tools were still important resources.  You don't see many phone booths anymore.  Internet Cafes have taken the place of the public phone booth, and soon those will go the way of the Dodo with the advent of ubiquitous computing.

Nowadays everyone has cell phones so public payphones are no longer profitable.  When you consider the amount of money payphones collect vs. the amount the phone company has to pay to clean up graffiti and vandalism, payphones are not a good business model any more.  For example, take a look at the Eircom booth on the left:  Someone has broken into the coin box.  I'm sure the thieves were disappointed with the haul; there probably wasn't much change in there anyway.

Back in the day, (and I'm talking about the 1970s here,) payphones were everywhere.  Back in the 1970s you could open up a box of Cap'n Crunch cereal and find a plastic toy whistle.  The Quaker Oats company had not intended the whistle to be anything other that that, a plastic toy.  Phone hackers (called Phreaks) discovered that the Cap'n Crunch whistle could be easily modified to emit a 2600 hz tone.  That was the frequency used by the telephone company to signal that a trunk line was free.  In a nutshell, it bypassed the coinbox on a payphone and let the "whistle blower" into the phone switching system through the back door.

Phone phreaks used to play games where they would route calls around the world with payphones.  I read a story about one Phreak in Los Angeles who used a Blue Box (a home built gadget that emitted other frequencies used by the phone company) to route his calls.  First Dallas, then to New York, then London, then Frankfurt, then Moscow, then Tokyo.  Finally he routed the call back to the phone booth adjacent to him.  He answered the phone and had a conversation with himself; the delay on the line was about 60 seconds.

The days of phone booths and Phreaking are long gone.  However, with the recent hacking jobs in the news (i.e. Lulz Security) it appears that Hackers & Phreaks are still finding ways to amuse themselves.  I'm not saying this is good or bad, I'm just saying the more things change, the more things stay the same.