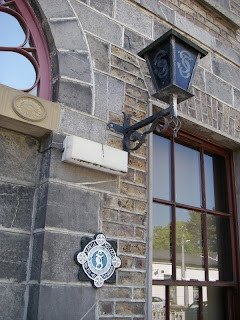 On Wednesday last week I wanted to explore my neighborhood. We heard there was a Superquinn grocery store nearby and I was determined to find it. I set out in gloomy grey weather wearing a black leather coat and by some freak of nature—I had heard Summer was a day in June—the sun came out. Really! It was all bright and stuff. Weird. Computer scientists don't go out in the sun, so I remembered my boy scout training and I took off my coat. I was careful to hold it so nothing fell out. In fact, every five minutes I stopped to check that nothing had fallen out. By the time I reached Superquinn, my passport had fallen out. Gah! I felt this really awful combination of frantic, stupid and embarrassed, kind of like those French commercials where the demented rabbits run in circles and shout, “GAH!” Anyway, the nice people at Superquinn took my name, and I found a Garda (police officer) in the parking lot and told her my story as well. She suggested that I call the Garda station and give them my name, then maybe come by and file a report when I have the time.
So, the next day, I walked up to Superquinn again and checked if my passport had been turned in. Sorry, no luck. So I walked a couple kilometers into town and found the Garda station. (This by the way, took forever. Ask any Irishman, “Where is the Garda station?” and he will reply, “Down the road, next to the pub.” Take a walk some time through an Irish town. EVERYTHING in Ireland is next to a pub. Bicycle shop? Down the road next to the pub. Undertaker? Down the road next to the pub. Pub? Down the road next to the bigger pub.)
The same girl I had spoken to in the parking lot was standing behind the counter at the Garda station. She recognized me and said, “Aren't you lucky! A man found your passport and turned it in. There is still money inside!” (I asked, but they didn't get the man's contact information. I would have given him the 10 euro note stuffed into my passport.) Phew! Problem solved. Its a good thing we moved into a nice neighborhood. Thank you whoever you are, for turning in my passport to the Garda.
Posted by Hitchhiker42 at 16:14