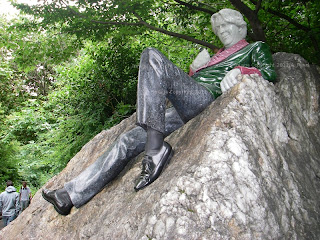 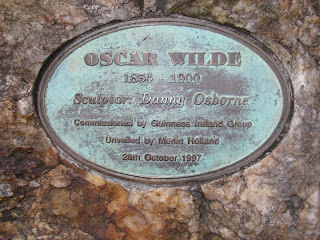 Oscar Wilde once lived at No. 1 Merrion Square.  A fantastic sculpture of him reclines in the park nearby.  This statue is so lifelike you might really think he is alive, as if this were some kind of street performance artist dressed as a statue.  It was commissioned by the people who brought you Guinness.  You will notice that there is no public statue of John Douglas, the 9th Marquess of Queensberry anywhere in the world.  Douglas was probably Wilde's greatest enemy and critic.  I think Wilde had the last laugh.  Even though Douglas caused Wilde's bankruptcy and exile, the world would rather forget a numbskull and remember a genius.  Douglas dropped out of the Naval Academy, having little talent for academics.    Wilde attended Trinity College, Dublin from 1871 to 1874, and then attended Magdalen College, Oxford from 1874 to 1878.  Oscar Wilde is today a celebrated historic figure of Dublin.
Posted by Hitchhiker42 at 10:32