What Santa Does in the Off Season 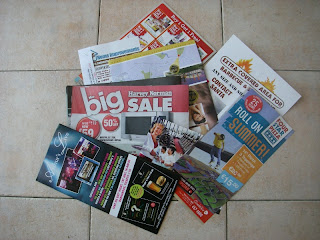 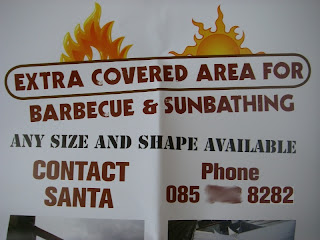 In the Dublin area, it is common to have a mail slot in your front door. It is also common to have a bunch of crap shoved through it by people who aren't the mailman. Case in point: This ad for some handyman who wants to put up cheap plastic awnings on people's patios. What I love about this particular add is the urgency of the slogan: CONTACT SANTA!
The funny thing is—and maybe I just notice things like this because I'm a computer programmer—that it says, “Extra covered area... for sunbathing.”
Wait, what?
First of all, a covered area? For sunbathing? Surely this is some new form of sunbathing that I'm not aware of. Perhaps with the recent popularity of all the Twilight movies, people are getting into “Vampire Sunbathing” where you actually go outside, but stay in the shade so as not to burst into flames as vampires are likely to do. Yeah that's it.
Secondly, sunbathing... in Ireland? Solar radiation does not reach this island. There is a current advertising campaign for bottled water in Ireland with slogans like:
“So Irish it thinks tan comes from a bottle”
“So Irish it thinks the Sun is a newspaper”
“So Irish it thinks summer is a day in July”
You get the idea. It rains a lot here. I have heard people whisper in pubs that it is a conspiracy by the British, and they have diverted all the would-be Irish sunshine to the Isle of Wight through clever use of underground magnets, but that is only hearsay. I personally believe it is a curse by Roma gypsies driven out of the country by harsher EU immigration restrictions. Deprived of their “brick making” jobs, they were forced to feck off back to Czech and former Bohemian empires where such professions are taken seriously, and they cast an evil spell on the Irish, such that they would never enjoy a good crop of Zinfandel, or the sunshine that goes with it. Oh those evil Gypsies.
Posted by Hitchhiker42 at 22:16