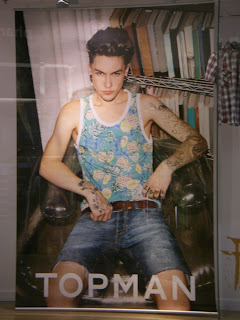 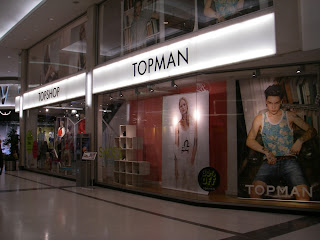 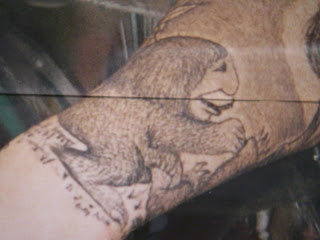 These pictures were taken in the Jervis Street mall in the center of Dublin. This is obviously the result of a 3 martini lunch in some marketing department where they thought a skinny male model wearing a floral-print wife-beater could best describe the edgy qualities of their brand. I can't resist being snarky when I see stuff like this. Look at his expression: He looks like someone just kicked sand in his face and stole his Justin Bieber concert tickets.
Who was the genius who thought their brand identity could best be expressed by a foppish looking boy with tattoos drawn on him? Some hipster probably thought it would be ironic to give him tattoos from Where the Wild Things Are, a children's book from the 70's by Maurice Sendak. Oh yeah, that makes him look tough. I can just see the new summer blockbuster movie with Danger Boy here: Underwear Model Without A Cause. The tribal plug earrings are such a silly fad too. Whenever I see some kid with those I wonder what they are going to look like when they are 40? His earlobes will be hanging down to his shoulders. I hope Tower Records is still hiring in 20 years.
Sorry for being so cynical. I'm just disgusted by our consumerist society, where people care way too much about looking like they don't care. Whatever happened to the days when people dressed well, men looked like men and everyone wore hats? Oh that's right, it's no longer the 1940's. (sigh) Back then only hobos wore cut-offs, women wore floral-prints, and people in National Geographic had body modifications you could pass a bone through. Sometimes I wish society had a rewind button.
Hey, I'm all for free expression. But seriously, we made a wrong turn when bicyclists started wearing clown costumes with weird shoes. I think it was some time in the late 80's. It all went terribly wrong from there. I would push the rewind button back to the point where pencil-thin ties were just starting to go out of style, Michael Jackson still had a face and right before the time bicyclists thought they needed a jersey with a breakfast cereal mascot printed on it. That was like, May 1988, right?
Posted by Hitchhiker42 at 16:11